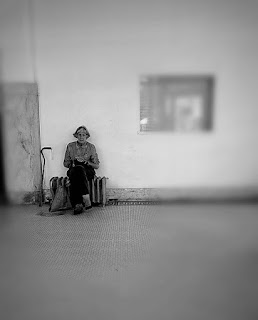 THE RADIATOR
Once a goddess,
She remembers a time
when the older records inside her,
played romance
But never motherhood
Dandelion days
Paris nights,
and Prince Edward oysters
They are much too far now
Damaged phonographic needle
and departed roars
She stretches for their memory
And with an unused womb
There's no one to touch her
Submerged in aloofness, subtle words now flow from her eyes
Now, in the midst of the nickel
She is a riddle that cannot be answered
Her speaking voice has no engagements
It's her mental voice which strikes the thunder
Basic math has brought her here,
and in silence,
The radiator waits
She sits
They warm each other
The violin plays 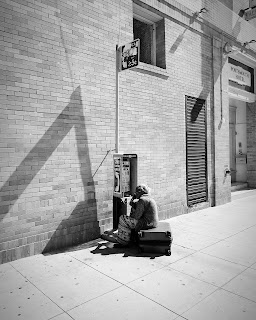 THE DRAG
In her search for security, she hasn't been able to find anything stable
As she ages, it gets worse
Voucher after voucher she's landed in randomness
SRO's have brought temporary relief but life has had its ways to subtract her additions
Bridges have covered her back but not her needs
Chapel shelters have brought temporary faith
Stolen tents and lost provisions bring a shrug, she wonders what's next
As she forages, she finds nutrition but instabilities and uncertainty line up on the radar
Hail Marys bring transient results
The new high-risers shine, senior housing stalls
The constant changing of her powerful city owes her nothing, there's nothing her strength can do
Her lifelines are running away—
Without technology, her process is slowed
She smells a few last opportunities so she goes to the payphone, sits on what's left.
She thinks of a biscuit and coffee as she inserts her coins
She hopes the receiver on the other side of the landline has acceptable news
NOSTRUM

It is not near, but it is not quite far
She can see the guillotine being prepared from a distance

Usually, in her vicinity, it is put to use about once a week
Claiming up to four on a bad week
Earlier at dawn, her friend fried away in the hot oil canister

Sweltering drippings, mincers, basucos, cleavers and nose candy are rampant in her sector,
eager to administrate their order
The smack is loose and in a constant hunt for her
She knows exactly where they are, her effort to dodge them is weak

They smell frailty in her organs and are ready to take her wit
Her heart is bitter for them, there is a vast space within requiring them to swim in her
It disregards their bad intentions and keeps the pumps for them coming
The panacea is empty and the swine plays tag
She hides behind the trash bin with rats as large as castoroides
The sun will soon come up, it will be an open field of targets, the little red dots will rarely
be missed
She will circle the bathhouses
The soup lines
The free concerts
The needles
The wretched
The The Councilman
The Mayor
The Law, the word of the holy spirit
Vultures will continue their flight
And her rest
And her hunger
And her peace
Will remain on hold

Email ThisBlogThis!Share to TwitterShare to FacebookShare to Pinterest
Labels: Poetry